Recently I found a need for a one-size-fits-all script to harden a web server. I wanted to be able to take a fresh server and get the server to a high rating on SSL Labs testing as easily as possible. The challenge with IIS setup (as opposed to Apache or Nginx) is the relative lack of scripts already published for improving security.

In the past, I’ve used a utility called IIS Crypto to harden IIS security, but running a GUI application on every web server as opposed to running a script is less efficient. I don’t have any reason to distrust the makers of the IIS Crypto application, but it is also nice to have complete visibility into the script I’m running to secure a server.

Alternatively, you can hand edit the XML files controlling your web server, but using this script will save time over editing those files.

What I would like to do is the following:

Prerequisites for this method of server hardening:

tl;dr: the entire script is on GitHub.

Some of the most recent SSL vulnerabilities have been due to older versions of the SSL protocol, SSLv3, which was built back in the 1990s. The exploits have allowed attackers to downgrade a server’s encryption from the relatively weak SSLv3 to no security at all. The best way to mitigate this is to disable SSL and rely on Transport Layer Security (TLS), the updated version of SSL, to secure traffic.

In addition to disabling SSLv3, it is necessary to disable weak ciphers and key exchange mechanisms to improve security. Weaker ciphers, such as RC4, can more easily be exploited than newer ciphers, so it is best to disable as many old ciphers as can be withstood by your end users. Older operating systems your users may still have, like Windows XP, may not be able to handle newer ciphers using Elastic Curve Diffie-Hellmann Exchange (ECDHE) and Advanced Encryption Standard (AES).

This standard should attempt to negotiate 256-bit encryption with as many clients as possible.

Another improvement to web server security is to ensure that Perfect Forward Secrecy (PFS) is enabled. PFS ensures that a web server’s keys used to secure traffic with clients cannot be decrypted by outsiders.

I will be incorporating Alexander Hass’ Powershell script to improve SSL for this project.

Make the server HTTPS only

Making traffic to a web server only travel over HTTPS ensures that all traffic is encrypted over the wire.

This is probably only necessary for sites handling sensitive information, but at the very least any login (username + password) should be encrypted.

This should be configured with a Rewrite rule using URL Rewrite. The rule itself can be found on OWASP, but this still requires either addition through GUI or in the web.config file. Here’s the script to create this rewrite rule.

One new standard making its way across the web is HTTP Strict Transport Security. The gist of it is that once a browser has been to a website with HTTPS, we want the browser to continue going to that website with HTTPS and not try to downgrade to HTTP.

Again, we will be referencing OWASP, but here is the script.

This is more of a wishlist item than a necessity.

Microsoft Internet Information Services (IIS) is really noisy by default. It tells the world “hey, this is an IIS server powered by ASP.NET.” This isn’t necessarily bad, but it isn’t great either. The less information we can give the attackers about what they are about to attack, the better.

The problem with IIS is that it’s actually somewhat difficult to actually remove the Server header that displays what type of server the application is running on. You can scrub the Server response variable in IIS, but the variable is still there.

The other options are to install URL Scan on your web server, but this isn’t compatible with IIS8 on Server 2012, and it can be somewhat temperamental with requests if the web developer hasn’t ensured that the application inputs are sanitized correctly.

Another option would be to remove the Server response header in the application itself.

For now, I will stick to the URL rewrite rule removing the server version. Let’s also remove the “Powered By ASP.NET” header.

Clickjacking (or framejacking) is a way for attackers to make people think they are on a different website and trick them into giving credentials to access the real website. An embedded frame may appear to be on your Facebook login, but in reality, you’re typing your credentials somewhere else.

To prevent this, we will use Microsoft guidance.

Putting it all together

The script I put together to mitigate these issues can be found on Github.

I spun up a fresh Windows 2012 R2 server, installed IIS 8.5 and an SSL cert from Comodo then ran an SSL Labs test. Here is the result: 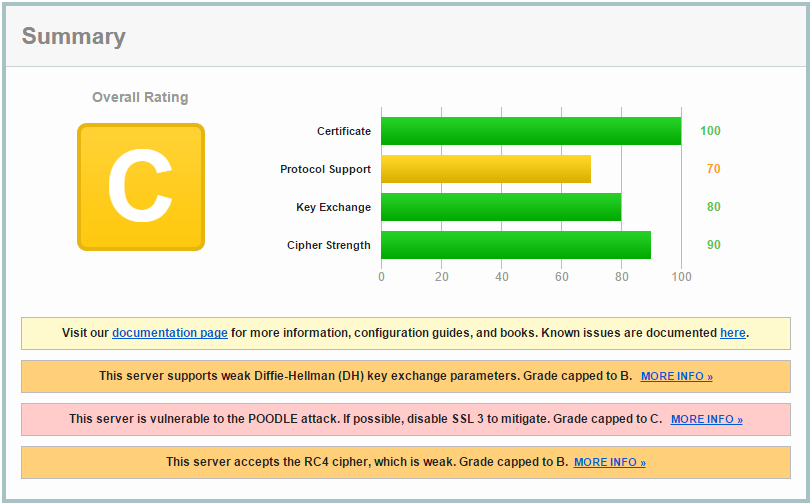 A fresh server is definitely not ready to handle your secure data yet. 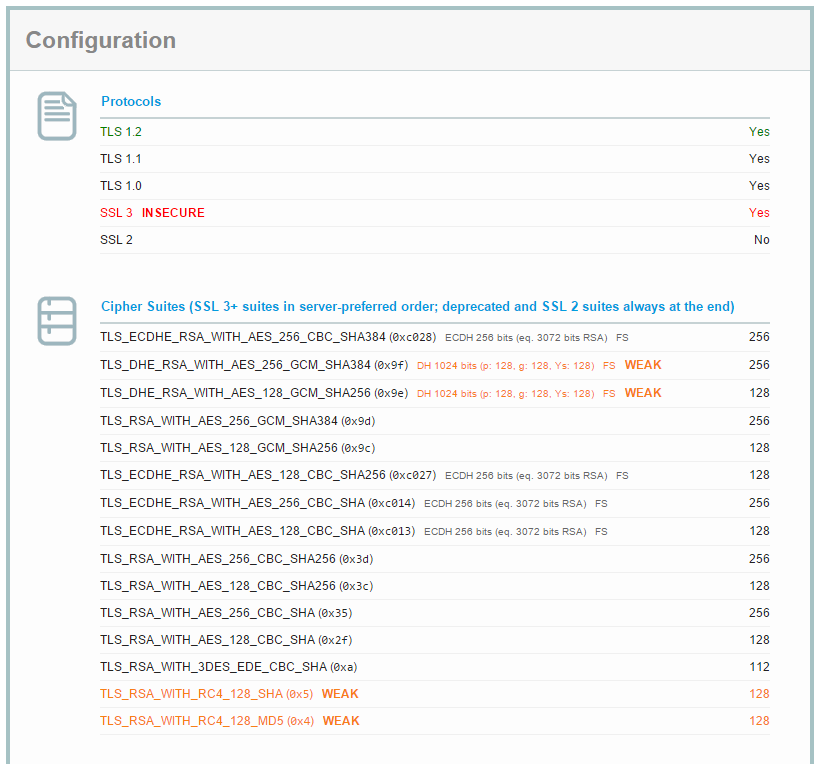 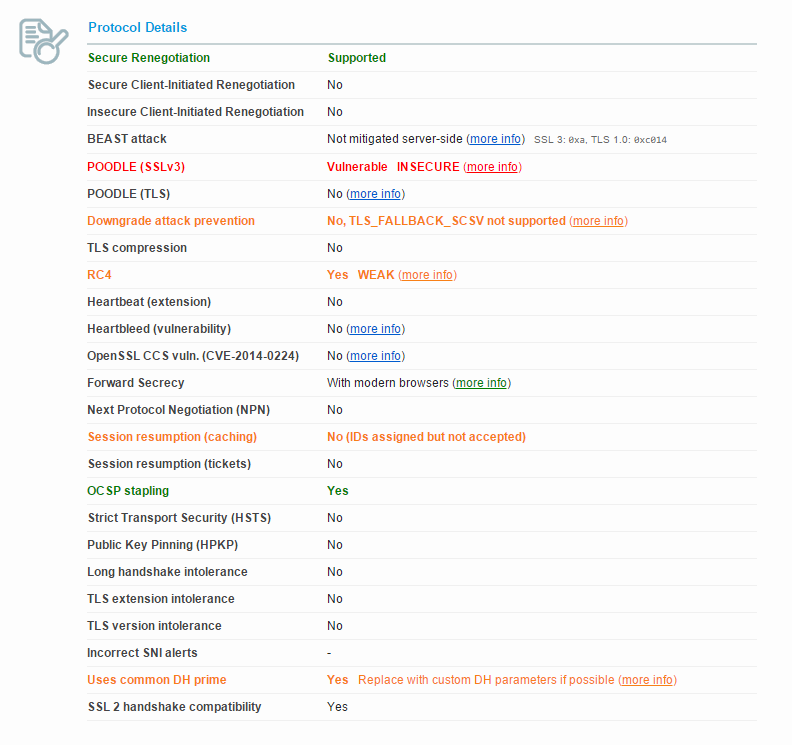 To run the script on a server, you’ll need to install:

Your SSL Certificate URL Rewrite 2.0 Open a PowerShell Window and import the script

When you import the script, you may see a warning about script execution policy. 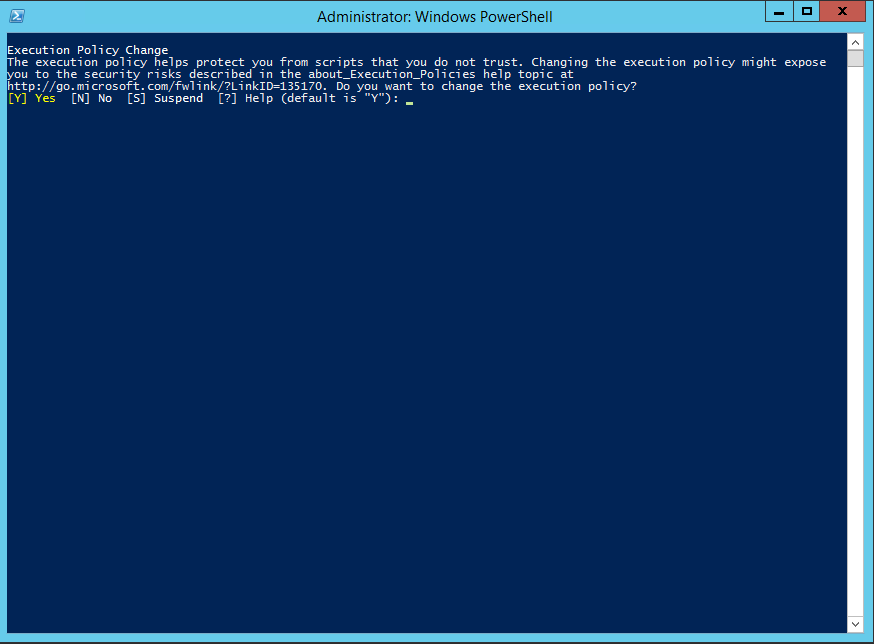 After enabling the Execution Policy change, run the script with:

The output should be similar to this: 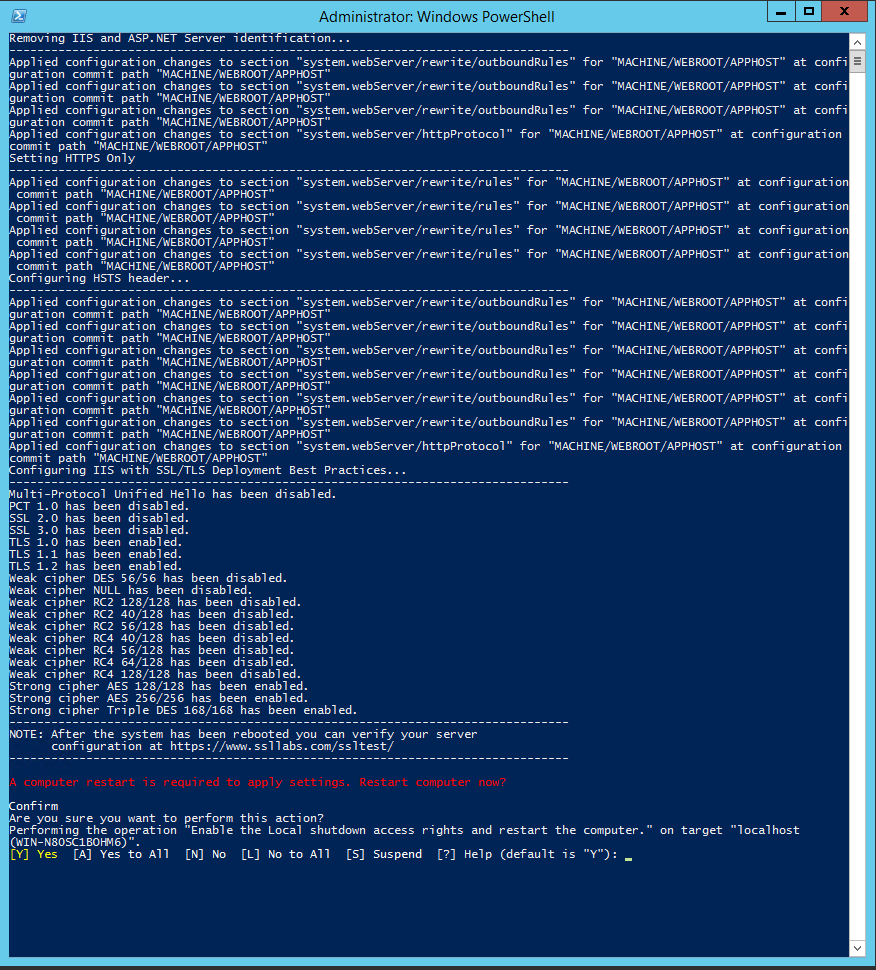 And a prompt to restart the server will appear.

After restarting the server, rerun the SSL Labs test and you should see something like this: 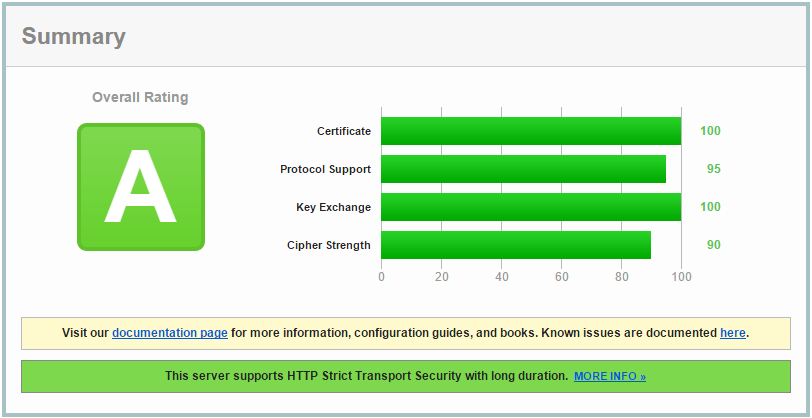 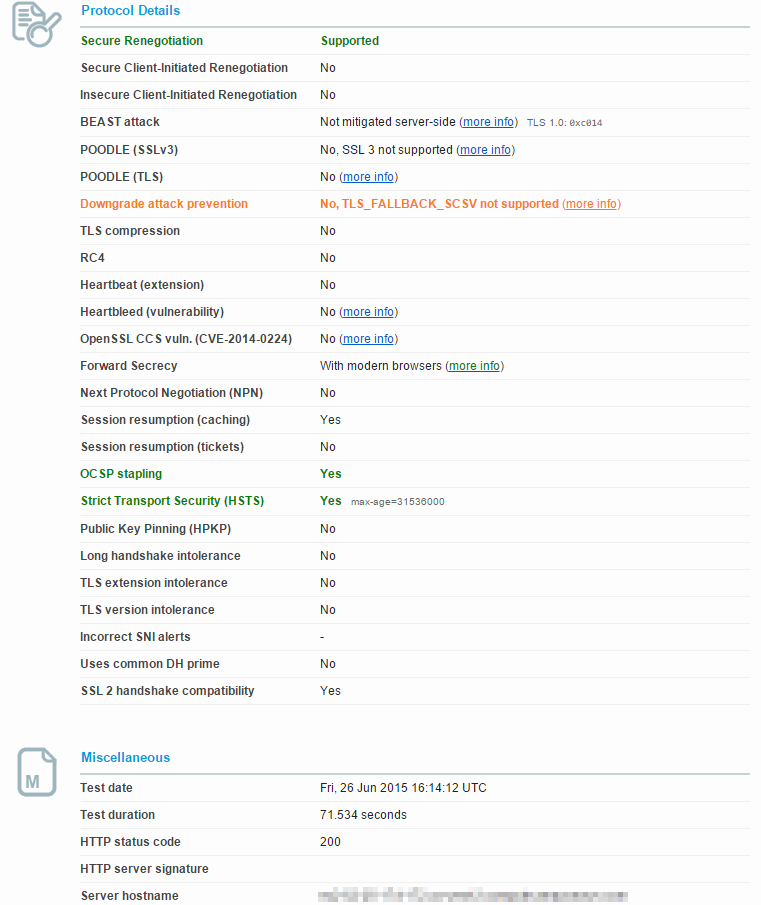 Notes in the margin: